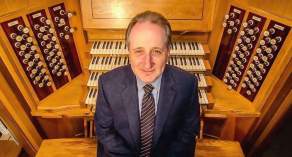 Our guest feature this month is written by Paul Hale. Paul is a former cathedral organist, most of whose time is now spent as a profes­sional organ consultant and recitalist. He was Rector Chori and Cathedral Organist at Southwell Minster, Nottingham­shire, from 1989 to 2016, having previously been Assistant Organist of Rochester Cathedral, Assistant Director of Music at Tonbridge School and Organ Scholar of New College, Oxford, where he studied with Sir David Lumsden and Professor Nicholas Danby, gaining an MA in Music. From 1990 to 2019 he was Conductor of the Nottingham Bach Choir. He is a diploma Examiner for the Royal College of Organists, and is also Organ Adviser to the dioceses of Southwell & Nottingham and of Lincoln. Paul has been elected an FRSA and has been awarded an Honorary FGCM and an Honorary FRCSM for “distinguished services to Church Music”. He was President of the Cathedral Organists Association 1999–2001, has served as Secretary of the annual Diocesan Organ Advisers’ Conference, has thrice been President of the Nottingham & District Society of Organists, and has been a Trustee of the Royal College of Organists, the Nottingham Albert Hall Binns Trust, the East Midlands Choirs Trust and the Percy Whitlock Trust, also having served as Chairman of the RSCM Southwell & Nottinghamshire Area for many years.

After a lifetime working in the cathedral music world (Organ Scholar of New College Oxford, Assistant Organist at Rochester and then Cathedral Organist & Rector Chori at Southwell, with a welcome interlude – my first post was as Assistant Director of Music at Tonbridge School) I might have expected something of a slowing-down when I retired from Southwell in the summer of 2016.  It was not to be!  My great and abiding passion for organ design and building, sparked off in my schooldays at Solihull School where the chapel organ was being built from 1964-67, has turned into a full-time occupation, with some sixty-five clients currently occupying my time.

It interests me that there is such a demand for organ consultants: the eight of us who are accredited members of the Association of Independent Organ Advisers are all busy.  Why so?  Probably for this main reason: churches and cathedrals are encouraged to be increasingly aware of the heritage for which they are responsible and to take dispassionate, informed, professional advice rather than simply asking a few organ-builders to make proposals unguided.  This means that almost all remotely significant organ projects – and even many that might be called ‘bread and butter’ work for organ builders – involve input from an accredited AIOA member.  What does ‘accredited’ signify, you might ask?  Well, to become accredited is rather akin to acquiring an Equity card in the acting profession: you have to have carried out some first-class work, with a complete paper-trail, satisfied clients and happy organ-builders, to prove that you are up to the job, submitting two complete projects for detailed scrutiny.  The bar is set high, which might explain that since the setting-up of the AIOA in 1996 only three new members have been accepted (Dr William McVicker, me, and Dr Andrew Hayden, in that order).

My work in this field typically involves an invitation from a church, cathedral, concert-hall, college or university to inspect an existing organ, write a detailed historical and technical report about it, making recommendations as to what needs to be accomplished.  Sometimes the task is restoring an organ of some historic and musical merit, with little or no change; sometimes an organ has been developed in previous decades according to the fashion of the time – decisions need taking as to how much of that to reverse or improve.  Sometimes an organ is considered unfit for purpose, a client seeking its enlargement or tonal improvement.  And sometimes a new organ is called for, though sadly this is an infrequent occurrence these days in Great Britain.  I suppose at any stage I might have one brand new organ project in progress, a couple of mechanically new organs based around a body of existing pipework, a number of restorations with either modest improvements or the removal of inappropriate additions / substitutions, and a number of more pure restorations.

One frustration for consultants and organ-builders alike is the situation which falls all too often – a client enthusiastically requests (and pays for) a consultant’s report, followed by perhaps three detailed sets of proposals from organ-builders.  And then – silence.  Many projects stall at that point, for finding the funds for a major project is a huge challenge, especially for a parish church.  So, of the sixty-five clients I mentioned at the start (“how does he cope with that many projects?” you will have asked) at least half are in ‘dormant’ or ‘hoping for funding’ stages.  Many of them do wake up again after a few years, but, sadly, some never do.  Organ-builders have to steel themselves to the reality that of twenty sets of proposals they produce, perhaps only one or two will turn into contracts. 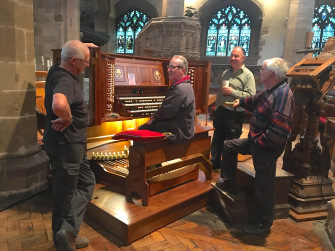 I’m sometimes asked “what interesting projects do you have on the go at present, Paul?”; the answer is – in all honesty – “all of them are really interesting”.  And it’s true: a real organ addict, which I unashamedly have been for 54 of my 67 years and still am, will find interest in any organ, from a ‘straight up and down’ little factory-made standard parish church 2-manual to a large cathedral organ, or from a delightful historic discovery in a country church to a much-rebuilt and rather dodgy city-centre church instrument.  Because every organ is a one-off, not only in its making but in its life-story, each has its own points of interest and challenges.

Looking through the ‘current’ files (and there is a whole bunch more parked in ‘pending’!) I am blessed with a stimulating variety of work, which, along with practising for the organ recitals I also enjoy giving, keeps me fully occupied five or six days a week.

To give the reader an idea of the breadth of my current active projects I will mention a handful – little and large.  Modest-sized restorations or rebuilds are in progress at churches in Steep, Ladybarn, Alderley Edge, Bierley, Cound and Shifnal; three have just been completed – Kidwelly, Ilkeston and Bradfield College.  A large organ relocation is going on at Potters Bar, a small organ relocation at Hexham, a small new organ based on old pipework at Bampton and a large one at Wolverhampton Collegiate church (with another planned for St Barnabas, Oxford).  A major rebuild is soon to start at Chesterton, a large new organ for Radley College will be started next year, as will rebuilds at several churches including Corbridge, Longparish, Platt, Grasmere and Ravenstonedale.  Other major projects awaiting funds/permissions include rebuilds at Ampleforth College, Great Yarmouth Minster, St Mary’s Moseley, Goring-on-Thames, Holy Rude Stirling, Turvey, All Saints Cheltenham, Devizes, Attleborough and Wymondham Abbey.  Cathedral work always brings with it particular responsibility and added scrutiny.  I have been privileged to work with many cathedrals over the years, having advised Truro and Salisbury on recent work, and being currently involved in at Winchester and Gloucester, among others.

So – retirement?  Don’t know the meaning of the word!

If you would like to write a ‘Monthly Feature’, do please get in touch. It can be about anything to do with the organ. Perhaps your experience on a course you’ve attended, buying a new organ, the day in the life of an organ builder, my favourite organ. I’d love to hear from you!

The Organ Manual is Proudly Sponsored by

Do you run a course, have an organ business, provide access to a practice organ, offer organ lessons – or have anything else organ related to share with others? If so, please drop me a message so I can share it with users here, free of charge.