Being President of the RCO 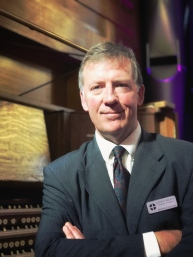 Gerard Brooks is Presdient of the RCO, a concert organist and organ teacher. His studies started with John Webster, and was elected Organ Scholar at Lincoln College, Oxford. Gerard is Director of Music at Methodist Central Hall, Westminster, and Curator Organist of the reconstructed 18th century Bridge organ of Christ Church, Spitalfields. He teaches at Latymer Upper School and for the Royal College of Organists Academy and is an organ professor at the Royal Academy of Music.

It was an unexpected but great honour to be invited to be the current President of the Royal College of Organists: I’ve been a member from student days and I’ve seen it develop from being a rather intimidating body focused on examinations to being an organisation that is fully committed to the education and encouragement of organists of all standards. If you are a member you can access a plethora of online resources on iRCO. Here you will find videos, articles and much more.  Most important of all, perhaps, you can find accredited teachers all of whom are well-versed in the latest scholarship. The two best teachers I ever had were able to look at every aspect of my playing: not just the finer points of interpretation, but also how I sat, how I moved when I played, how I approached articulation, fingering and so on. All our teachers can help you with these important aspects of playing the organ.

The President holds office for two years and is expected to act as an ambassador for the college and the organ in general.  The role is an honorary one, involving attending trustee meetings, at which he or she is able to express views and generally take part in discussions. There are between ten and twenty trustees: they are not all organists, although many are – some as dedicated amateurs. The discussions partly concern financial matters relating to the college’s charitable status, but no meeting goes by without a President’s report and some discussion about what the college exists to promote: organ playing and choral conducting, and activities and courses we want to promote. Our new CEO is Sir Andrew Parmley, a very passionate advocate of the organ: his latest initiative is National Organ Day on Saturday 18th April 2020, when he hopes that every organ in the country will be played! We will be hosting an educational event at my own church, Methodist Central Hall Westminster as our contribution to the day.

As President, I also try to support various events as far as I can: in the past year these have included attending organ concerts, signing and giving out certificates for various RCO courses, examining end of year student exams and  teaching on various events. Perhaps the most important duty of all is to present diplomas and medals and give a speech at the annual Conferment ceremony in Southwark Cathedral.  I will do this for the first time on 7th March this year.

If all this sounds rather formal to you, well – in some ways it is! But never forget that what inspires it all and runs through it like a thread is the love we all have for this ‘wondrous machine’ the organ and, most importantly of all, the music we play on it. I often think that we organists have the most difficult job of all musicians: we play an instrument that is in itself inexpressive, since we cannot alter the sound by blowing or pressing harder, nor can we cannot create a natural vibrato with our lungs or our fingers.  All the more reason therefore to be as expressive as we can with articulation and rubato and by controlling the length and release of notes. Sometimes I think we fall into the trap of playing the ‘wondrous machine’ like a machine! I’ve found myself on several occasions asking a gifted pupil who has mastered the technical challenges of a piece to stop playing the organ ‘like an organist’ and start playing like a musician! If you listen to half a dozen recordings of a piece by top pianists or conductors you’ll soon discover that not one is the same; each performer brings interpretative insight to the composer’s original vision and I believe we organists need to bring the same creative imagination to our playing. Whenever I go to an organ concert, my hope is that I will hear in the performance of a piece I know well some way of playing this or that phrase that I had never thought of before: I want to be challenged by a performance that is not just a recital of the notes. This desire frequently informs the way I teach. Teaching has always played an important role in my professional life: I was for several years a class music teacher, and the principles of sharing information are the same whether you are teaching small children or seasoned adults: the challenge is to inform and enlighten people in a way that they can individually respond to with interest and excitement!  And while I’m on the subject of excitement, let’s not forget that there is nothing more exciting than live music-making; it’s all too easy in this digital age of radio and recordings to sit at home and listen to music, but recordings cannot capture the thrilling atmosphere of a live concert, so I am always encouraging students to go and listen to real performances: we can all learn from each other

If you would like to write a ‘Monthly Feature’, do please get in touch. It can be about anything to do with the organ. Perhaps your experience on a course you’ve attended, buying a new organ, the day in the life of an organ builder, my favourite organ. I’d love to hear from you!

Do you run a course, have an organ business, provide access to a practice organ, offer organ lessons – or have anything else organ related to share with others? If so, please drop me a message so I can share it with users here, free of charge.